###What I want to do I want to explore whether or not Public Lab maps can be used to document wi...

I want to explore whether or not Public Lab maps can be used to document wildlife. the Helikite has been described as a tool for wildlife investigation, both by the product site and by the biological contractors for Prince William Sound RCAC. There's also an interest in mapping heat signatures of wildlife from the Park Service.

It seems as though this method is achievable with public lab methods, so i wanted to document that here to explain the logic so that people could pick it apart.

Remember this Great Egret from the first Barataria trip? This is a similar kind of thing. But we'd like to be able to look into the marsh from the boat. Other companies have developed their own photographic methods for federal biological survey contracts. 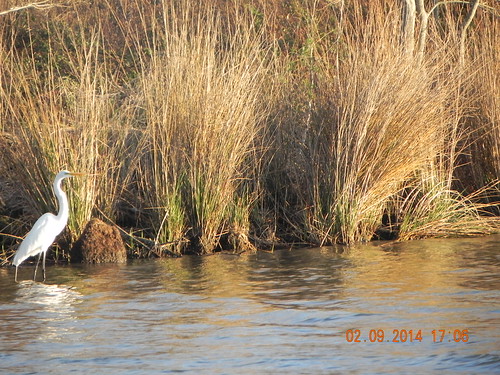 (this is not the snowy egret I saw, this is another picture of a great egret taken on another day, as a representation of what I saw in binoculars while we were balloon mapping)

###My attempt and results During the last Barataria 2014 triphttps://mapknitter.org/maps/bm1-barataria-2014

One Snowy Egret was sighted along the bank of the Canal. The time of this sighting was noted, and our location (via GPS) and what appears to be the bird (leftmost in the main photo here) was later identified in the photograph. For Plant identification in aerial photography, one develops a description of the element (plant species or wetland type) called a "Characterization." My Snowy Egret characterization is "White, Oval, Small, with ancilllary information -->Sited from boat during the photograph, 2014."

Based on that Characterization, there are six Egrets of some kind in this image. ###Questions and next steps

How could I be incorrect? Well, it seems like I could be misidentifying birds for trash. there are many white, oval, small objects in the wrack line. Are these trash items that have the same characterization as egrets?

Should I only count egrets if there are small, white, ovals on the shoreline, as in my original sighting? Then the number is 2.

This is about 5 acres of marsh in this photo. Is that kind of heron density unusual? I think not, but i'm unsure.

This can expand the potential for what can be mapped with public lab aerial photography; I can also use this to explain to the public what kinds of monitoring are proposed for the BP response, and what the limitations are.

Great idea Scott! Actually Ned and I started working on this (vegetation classification) problem while ago but we halted last few months due to our crazy busy schedule... (so many things to do but so little time :) ) I think those problems are very relevant and can be combined...

I've been using my kite and little putt-putt boat in Sweetwater Pond to count cordgrass and cattail though I'm probably doing it wrong. The boat launches from about anywhere and is very quiet. We see egrets, big redfish too.

Hi Scott - Using public lab aerial photography for counting wildlife is a sensible idea. In your example image the resolution is probably your most limiting factor. If it is practical to fly lower or use higher magnification that would help a lot. That way you have additional cues like shape to work with. As you note, a tiny white blob can be confused with a lot of other features so you're forced to incorporate additional knowledge like behavior to get reasonable accuracy. At this point the simplest method is to use visual interpretation but automated feature counting is an interesting option.

The Snowy Egret is the only south Louisiana wader that is constrained by both water depth and prey density. Maybe water depth could be inferred from high altitude photos given time of day and tides or other factor? How is prey density measured? The Great Egret and Great Blue Heron, which apparently do not share the Snowy Egret's feeding constraints, seem more abundant to me these days but that's just an observation.

Having this sort of info might help build a simple decision tree, a first step in automated counting.