This post is cross-listed at the PBS IdeaLab blog, and was co-authored with Becki Chall Public L...

This post is cross-listed at the PBS IdeaLab blog, and was co-authored with Becki Chall

Public Lab is structured like many open source communities, with a non-profit hosting and coordinating the efforts of a broader, distributed community of contributors and members. However, we are in the unique position that our community creates innovative open source hardware projects -- tools to measure and quantify pollution -- and unlike software, it takes some materials and money to actually make these tools. As we’ve grown over the past 2 years, from just a few dozen members to thousands today, crowdfunding has played a key role in scaling our effort and reaching new people. 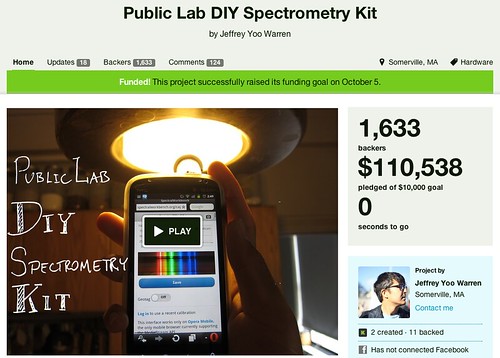 Consider a project like our DIY Spectrometry Kit, which was conceived of just after the Deepwater Horizon oil spill to attempt to identify petroleum contamination. In the summer of 2012, just a few dozen people had ever built one of our designs, let alone uploaded and shared their work. As the device’s design matured to the point that anyone could easily build a basic version for less than $40, we set out to reach a much larger audience while identifying new design ideas, use cases, and contributors, through a Kickstarter project. Our theory was that many more people would get involved if we offered a simple set of parts in a box, with clear instructions for assembly and use.

By October 2012, over 1600 people had backed the project, raising over $110k -- and by the end of December, more than half of them had received a spectrometer kit. Many were up and running shortly after the holidays, and we began to see regular submissions of open spectral data at https://spectralworkbench.org, as well as new faces and strong opinions on Public Lab’s spectrometry mailing list.

Kickstarter doesn’t always work this way: often, projects turn into startups, and the first generation of backers simply become the first batch of customers. But as a community whose mission is to involve people in the process of creating new environmental technologies, we had to make sure people didn’t think of us as a company but as a community. Though we branded the devices a bit and made them look “nice”, we made sure previous contributors were listed in the documentation, which explicitly welcomed newcomers into our community and encouraged them to get plugged into our mailing list and website. 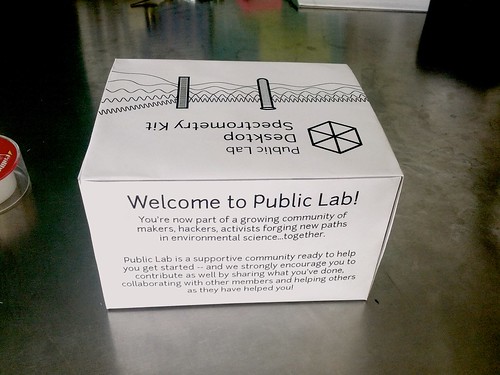 As a small nonprofit, this approach is not only in the spirit of our work, but essential to our community’s ability to scale up. To create a “customer support” contact rather than a community mailing list would be to make ourselves the exclusive contact point and “authority” for a project which was developed through open collaboration. For the kind of change we are trying to make, everyone has to be willing to learn, but also to teach -- to support fellow contributors and to work together to improve our shared designs.

One aspect of the crowdfunding model that we have been careful about is the production methods themselves. While it’s certainly vastly different to procure parts for 1,000 spectrometers, compared to one person assembling a single device, we all agreed that the device should be easy to assemble without buying a Public Lab kit -- from off-the-shelf parts, at a reasonable cost. Thus the parts we chose were all easily obtainable -- from the aluminum conduit box enclosure, to the commercially available USB webcams and the DVD diffraction grating which makes spectrometry possible. 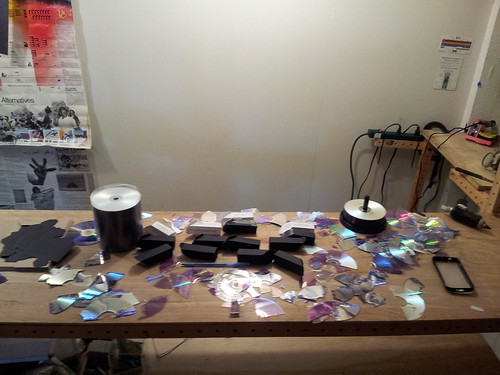 While switching to a purpose-made “holographic grating” would have made for a slightly more consistent and easy-to-assemble kit (not to mention the relative ease of packing it vs. chopping up hundreds of DVDs with a paper cutter...), it would have meant that anyone attempting to build their own would have specially order such grating material -- something many folks around the world cannot do. Some of these decisions also made for a slightly less optimal device -- but our priority was to ensure that the design was replicable, cheap, and easy. Advanced users can take several steps to dramatically improve the device, so the sky is the limit!

One clear advantage of distributing kits, besides the bulk prices we’re able to get, is that almost 2000 people now have a nearly identical device -- so they can learn from one another with greater ease, not to mention develop applications and methodologies which thousands of others can reproduce with their matching devices. We call this the “platform effect” -- where this “good enough” basic design has been standardized to the point that people can build technologies and techniques on top of it. In many ways, we’re looking to the success of the Arduino project, which created not only a common software library, but a standardized circuit layout and headers to support a whole ecology of software and hardware additions which are now used by -- and produced by -- countless people and organizations. 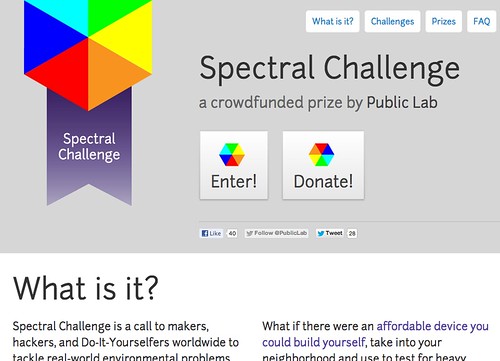 As we continue to grow, we are exploring innovative ways to use crowdfunding to get people to collaboratively use the spectrometers they now have in hand to tackle real world problems. Recently, we have launched the Spectral Challenge, a kind of “X Prize for DIY science”, but it's crowdfunded -- meaning that those who support the goals of the Challenge can participate in the competition directly, or by contributing to the prize pool. Additionally, Public Lab will continue to leverage more traditional means of crowdfunding as our community develops new projects to measure plant health and produce thermal images -- and we’ll have to continue to ensure that any kits we sell clearly welcome new contributors into the community. The lessons we’ve learned from our first two kit-focused Kickstarters will help us with everything from the box design to the way we design data sharing software. The dream, of course, is that in years to come, as we pass the 10,000 member and 100,000 member marks, we continue to be a community which -- through peer-to-peer support -- helps one another identify and measure pollution without breaking the bank.

12 notes
created by warren over 9 years ago