Please note that this research note is a work in progress with a group of contributors. Expect mo...

Please note that this research note is a work in progress with a group of contributors. Expect more content very soon.

This is an account of the thermal imaging of the Mystic Generator Station using Thermal Fishing Bobs. A previous successful imaging occurred at the Kendall Power Plant. You can access that research note here. This event aims to duplicate these results.

The event was covered by The Boston Globe. You can access the article here.

-There were loud crashing sounds coming from the station at about 20:08. It sounded like a ton of pebbles crashing down on a sheet of metal. There were about 10 randomly occurring crashes.

-There was a massive crashing sound at about 20:30. A plume of vapor was emitted from the older portion of the building. It lasted for about 20-30 seconds.

-There was a brief and rapid change from blue to red at the beginning of the float out to the station. This was probably a minor glitch.

-As the boats floated past the plant, it was difficult to see the lights at all. We mostly had to hear through radio if there was any color change.

We attempted a second round with a narrower temperature range 70-75º F. This was done in order to encourage a change in color, if possible. With a narrower temperature range, even the slightest change in temperature would result in a more significant change in color. There were two floaties, each with four fishing bobs instead of two. This was done in order to make the floaties more visible from the shore. One floatie had only long thermistors while the other only had short.

The boats went out and constantly stayed green all the way to the plant. After quite some distance, they became indiscernible from the shore despite the additional bobs. Once again, we had to rely on radio to hear what color change occurred. The boats returned and the crew mentioned that there was a slight green to yellow change.

We packed everything up and called it a night.

Points for Next Experiment Setting off for Run 1 Setting up for Run 2. Laura prepares her fishing bobs. Set up for Run 2 is complete 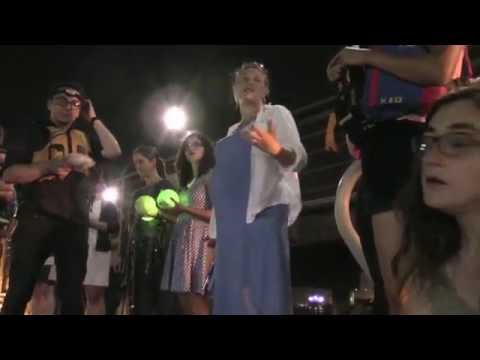